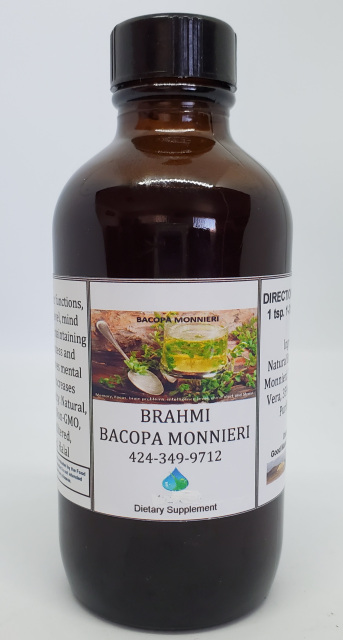 Bacopa belongs to a small group of herbs known as adaptogens.

Adaptogens make you more resilient to stress and promote overall health by bringing the body into a state of balance called homeostasis.

Homeostasis is your body’s ability to actively maintain a stable internal environment, such as keeping your body temperature relatively constant.

Like all adaptogenic herbs, bacopa balances the level of the potentially damaging stress hormone cortisol and supports healthy adrenal function.

The adrenal glands are an important part of a properly functioning stress response system.

Adaptogens have the unique ability to simultaneously calm a stressed mind and increase energy without being either sedating or stimulating.

In many ways, adaptogens act like a thermostat that keeps you in an emotional “comfort zone.”

It’s this ability to restore balance that makes bacopa equally beneficial for both anxiety and depression.

Another way bacopa brings you into balance is by regulating neurotransmitters, biochemicals that brain cells use to communicate with each other.

They control your ability to focus, concentrate, learn, remember, and turn off your mind when you want to relax or go to sleep.

In this way, bacopa brings the levels of major neurotransmitters — serotonin, dopamine, and GABA — into balance.

Serotonin is the main brain chemical of happiness.

Dopamine is essential for feeling productive and motivated.

GABA (gamma-aminobutyric acid) calms the mind and puts the brakes on brain activity when needed.

Bacopa also increases the level of acetylcholine, the neurotransmitter of memory and learning.

Symptoms of low levels of acetylcholine are typical of what are considered “senior moments” — struggling to find the right word, constantly losing things, and not remembering what you’ve just read.

Without adequate acetylcholine, your brain can’t turn short-term memories into long-term ones.

Since Alzheimer’s patients typically have extremely low acetylcholine levels — usually around 10% of normal — it’s suspected that this brain chemical plays a significant role in Alzheimer’s.

Bacopa has been found to encourage the growth of new nerve endings called dendrites.

Dendrites are found at the ends of neurons and are essential for communication between brain cells.

5. Bacopa is a potent antioxidant.

Bacopa is a powerful antioxidant that fights the effects of free radical damage to the brain.

When the immune system becomes overactive, it results in chronic inflammation.

This can happen anywhere in the body, including in the brain.

7. Bacopa acts as an antidepressant.

Bacopa has been shown in clinical trials to reduce symptoms of both depression and anxiety.

Bacopa prevents excessive amounts of aluminum from accumulating in the brain.

Aluminum is a common, but neurotoxic, metal that causes memory loss and is found in high concentrations in the brains of Alzheimer’s patients.

Bacopa can offset the memory loss caused by medications that are anticholinergic.

Anticholinergic drugs cause memory loss by blocking the action of acetylcholine, the neurotransmitter of memory and learning.

These drugs are surprisingly common and include many of those which start with “anti” such as antihistamines, antidepressants, antipsychotics, antibiotics, antispasmodics, or antihypertensives.

Brain plasticity is the brain’s ability to keep changing, growing, and forming new neural pathways throughout your lifetime.

11. Bacopa may help with Alzheimer’s disease.

Beta amyloid plaque buildup in the brain is one of the hallmarks of Alzheimer’s disease.

Bacopa has been shown to reduce these plaques in the brains of mice by 60%.

Additionally, bacopa corrects low levels of BDNF which has also been linked to Alzheimer’s.

Unlike most other brain supplements, bacopa has actually been studied in children — clearly a testament to its safety!

While the mechanism is not yet understood, bacopa has been found to be a safe and effective natural remedy for attention deficit hyperactivity disorder (ADHD).

In one clinical trial, 85% of children who were given BacoMind, a patented form of bacopa, experienced a reduction in ADHD symptoms, including restlessness, impulsiveness, self control, and learning problems.

Numerous studies have found bacopa to be helpful for both children and adults with dyslexia.